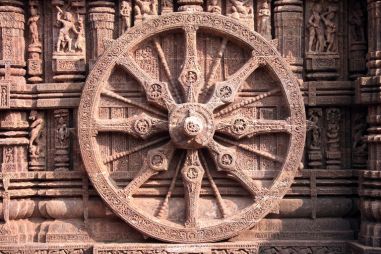 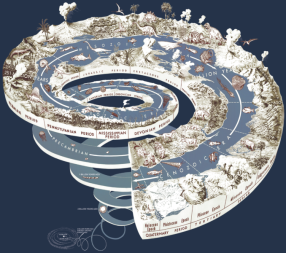 It has been said, with some justification, that one ‘cannot step in the same river twice’. That the inexorable flow of time ineffably means that the past reality of a thing is irrecoverable, in the present nor future.

And yet, despite the provenance of this proverb, it is not … or not entirely accurately, at least, the Indo-European world-view upon the matter.

For us, time is not a mere [and I should really get over my enthusiasm for this particular Proto-Indo-European pun – ‘Mer’ as in “Death”, but also as in “large body of water”] linear flow – an onrushing and uni-directional pathway which leads *only* to a Telos, a fixed and in a very real sense *permanent* End.

Even notwithstanding the significant and veer-y important concepts entailed in Being Above Time, Mythic Time, the potentially hugely intriguing notion of Time as an ‘ocean’ rather than a hose-pipe nor culvert and other such matters – what we have is something quite different.

*In*-universe, *In*-“flow”, it can indeed be useful and helpful to think of Time as a river. The Universe starts at one point, ends at another [although generally, with the occasional exceptions such as that outlined in the Matsya Purana, in Fire rather than Flood … #EkpyrosisWHENN ], unfolds and unfurls itself from the former to the latter, and then from the perspective of many if not most of those in it … stops rather abruptly.

Cases of the inverse, the reverse, the obverse … wherein the ‘water’ of the time-stream somehow miraculously begins to fold back upon itself, go back upstream, flow *uphill*, are excessively, if not entirely rare.

Yet that does not mean that Time does not repeat, when we take the broader, the *macroscopic* viewpoint – and see that as the Universe, in the Vedic, in the Eddic, and no doubt in other Indo-European cosmologies and cosmogonies as well … as the Universe is ‘cyclical’, going from beginning to end and thence back to the beginning to unfold all over again – this in fact means that Time is *not* purely “linear”.

And, to return to our river metaphors – if you were somehow to endure beyond the death of this universe and through the unutterable birth-pangs of the next [plus a bit of further additional *in-universe* time into the bargain], you *could* very well indeed theoretically find yourself able to stepe in the *exact same* “river” that you had done before, all those long aeons ago before the Burning.

[This also, as an aside, indicates that ‘time travel’ is possible – it’s just that it occurs … in much the same way as it does for everybody else – by moving forward through time, likely at the regular pace…until eventually you reach the point you want to ‘arrive’ at – at which piont you keep on progressing, regardless]

I said ‘river metaphors’ in the plural, because this also recalls the way the ‘water cycle’ works, in its return of the water molecules from ocean, through atmosphere, and ultimately, to mountain-top and thence the ‘river’ phase again. [This, incidentally, also figures into just why it was that Vritra’s malefic action *disrupting* such a cyclical process, was put down with such great force and firmness – for it is Dharma-Yuddha to uphold the motion of the great chariot-wheel, and A’Dharmic, A’Rta, in the extreme, to attempt to hold it all artificially in disequilibrium’d, Dukkha [‘ill-fitting’] place]

Now, from there, things get rather “interesting”; because in this somewhat hypothetical scenario of somebody somehow managing to make it from Universe to Universe for the purposes of a little light recreational wading and/or fly-fishing [and, as a point of interest, in both Hindu and Nordic cosmology, that’s actually *exactly* what some of the Ancestors do, in point of fact, *do*], we start to encounter altogether different issues of ‘causality’.

For instance – if you wait long enough by the river in question, is it not the ‘body of your enemy’ which floats by … but rather, you run into a latter, subsequent-universe version of you turning up just exactly as you had done so in the previous universe of your predecessor-‘original’ [for is anything truly ‘new’ under the supernal sun?] cyclic manifestation?

And, perhaps closely related to this question – does *everything* have to unfold *exactly* the same in the ‘new’ universe as it did in the old? [Which has, itself, some rather interesting implications for the concepts of free will, determinism, and the quantum indeterminacy which may occasionally balance deftly between them] Even, in fact *especially* if some ‘new’ narrative-causal agent such as a previous-universe’s You turns up to suddenly, subtly, *change* the resultant mix? [Or, for that matter, dependent upon your position upon such matters, if the Ancestors and Deity or Deities who Survive the Pralaya , do so in a way that allows for or even actively encourages ‘different’ actions and manifestations in the ‘new’ – as “Memory” is often wont to do, for those who are capable of Learning]

These questions, I am not (yet, anyway – give it some .. time) in a position to answer; although I do note that the rather fragmentary mythological accounting we have for the post-Ragnarok world, from the annals of Nordic mytho-religious corpus and eschatology, would appear to come down somewhat upon the side of *yes*, things *can* be different.

It is a rather ‘hopeful’ note, too – the notion that all of that bloodshed upon Vigrid is, in fact ,for some grander-scale cosmological purpose of enabling a new and better world , less enfiladed so eventual-encompassingly by evil.

If this *is* the case, then propelled in no small part by that noble maxim – “For Your Tomorrow, We Gave Our Today” – what we have is a model of Time that is not simply ‘around and around’ .

But rather, when considered in multiple dimensions, is also going ‘upwards’ – a ‘helicase’, much like the both circling *and* ascending shape of a strand of DNA. [Or, perhaps, a coiled-but-rising Serpent of Power, to continue with our Vedic skein of snakeskin [for this, too, is shed; with, via some accounts, AdiSheesha being the ‘remainder’ at the End Of All Things] metaphors.]

As I have said, this is a pretty ‘hopeful’ perspective. In much the same way that *in theory*, the ongoing cycles of samskara & sanskara are supposed to lead to, eventually, a soul being able to ‘overcome’ those previous mistakes which otherwise continuously weigh down upon it, lifetime after lifetime [“THE REINCARNATIONS WILL CONTINUE – UNTIL THE SOUL IMPROVES” … or we run out of ‘Time’, ], it may therefore be possible that again, at the uber-macroscopic view, the universe at large might perhaps be granted the opportunity to do likewise.

But who knows – who can say. These are speculative questions which one must perhaps wait quite some time for the answers to.