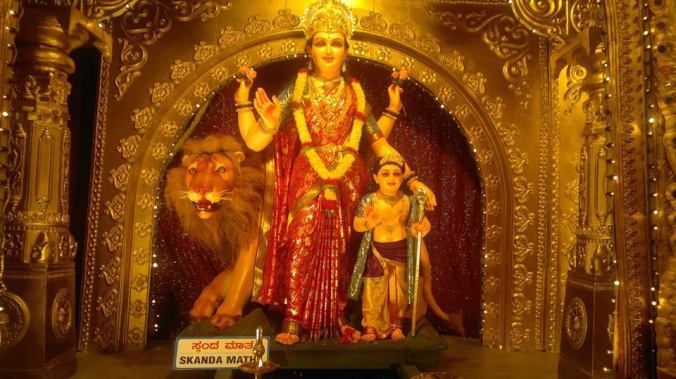 The Fifth Night of #NavRatri is dedicated to Ma as SkandaMata – the Mother of Skanda (Kartikeya), one of the foremost of our War Gods. He takes after His Mother in that regard 😀

Of course, before situating SkandaMata within the overarching context of the NavaRatri Cycle, it is necessary to briefly introduce Lord Skanda, also known as Kartikeya.

Now, it is often held that both of these theonyms refer to the er … unique circumstances of His rather remarkable conception and birth; and certainly, as applies Kartikeya – of the Krittikas (six of the Pleiades star-cluster, Who gave birth to Him) – this is the case. Yet “Skanda”, which connotes *charging*, *attacking*, and *leaping* or *springing forth* … while I can see how this fits into the above rubric, due to the mechanism via which Lord Agni wound up er “involved” in the process, so to speak … to me appears far more logical to connect to Lord Skanda’s role and function – as the great warrior. Further, the likely PIE roots of the name, often proposed as “Skend” (‘Jump’), but to which I would also speculatively add “Skewd” (“shoot” or “throw”, and the same root as “Skewer” in modern English – a rather important thing for a soldier, equipped with a spear – or, as with many depictions of Skanda seated in the lap of SkandaMata … a bow and arrow !), both seem far more closely connoted with the nature of the Deity rather than being simply circumstances of conception.

In any case, Lord Skanda comes into existence in order to defeat the powerful demon Taraka – who had been granted a boon of conditional immortality by Lord Brahma (‘full’ immortality not being something Brahma has the power to give – there always must be something capable of killing you, and it’s frequently “buyer’s choice” … thus leading to some demons choosing things like “no man/””only a woman can kill me” because they do not think a woman can possibly be a martial threat … or, in this case, “only a Son of Lord Shiva shall be able to kill me”, on grounds that at the time Tarakasur sought immortality, Lord Shiva was very much in mourning as a result of the death of Lady Sati – and, having burned Kama to ashes, did not appear likely to be getting over Her any time soon in order to (re-)marry and have a Son).

As we have seen through the previous phases of the NavaDurga Mythic Cycle, by this point in the story, Parvati and Shiva have once again Found Each Other, and have successfully re-married. Thus allowing for the potential conception of a child – and throwing quite the spanner in the works for Tarakasur’s plans of universal domination, should this eventuate.

I won’t get into the .. precise ins and outs of Skanda’s backstory, but suffice to say Lord Agni intervenes (with the stated reasoning of endeavouring to keep Him safe even pre-nataly from the mighty Tarakasur et co), and this leads to a very angry Lady Parvati cursing Agni with the negative attributes of Flame (namely, to always be surrounded with the blackened haze of smoke, to be indiscriminate in what He devours, and His food always to be riven with impurities etc.) for daring to steal Her would-be child – Who eventually winds up being gestated and birthed by the aforementioned Pleiades (hence part of the reason He is often depicted with six heads – one for each Mother), in safety elsewhere. Whereupon Lord Agni returns, apologizes ,and explains the reasoning for what He has done – and Lady Parvati accepts Skanda as Her Son, even though born to different mothers, and begins to impart the martial wisdom and counsel to Him which She possesses in such grand abundance.

And the Slaying of the Demon Ensues. A common mytheme with Durga, as you may have perhaps noticed 😛

Now, to bring it back to SkandaMata .. what we therefore see here, is the logical continuation from Ma as Kushmanda. Namely, as ChandraGhanta to Kushmanda was the fulfilment and elevation of the Princess of the Moon into the Queen of the Sun .. Skandamata from Kushmanda therefore represents the Queen *with* a Son (and also continues the Solar Aspect mythememm with additional connection to ‘fire’ and its piety) – the HiranyaGarbha, the Cosmic Womb, has produced ‘issue’. A Prince. And it is an interesting point of commentary that the Force Which Hath Created (And Imbued) The Universe – has also produced, as well as *is* a personification of War. Perhaps one might speculate, therefore, that Warfare is very much fundamental and intrinsic to Existence – and indeed, there are an array of other Hindu (and Indo-European more broadly) myths which *further* support this contention.

The persona of Skandamata does not simply represent the role of a Queen in producing an Heir, however – as Her most magnanimous adoption of Skanda, even though He was born to other women, also represents the practice of adopting into the direct Imperial Household men who may have other births yet whose ‘essence’ speaks true to their lineage, so to speak – as Julius Caesar did for Augustus, for example.

Meanwhile, the figure of Skanda also represents another weapon – and a most potent one indeed – in Devi’s Arsenal. That of the ability of one’s line to continue, of one’s work not to end with one – but to be picked up and carried on by one’s children. And goals which one would not perhaps be able to accomplish by one’s self being attainable through the effort augmented through kin and progeny. It’s ‘just’ that the work and goals in question are warfare and demon-slaying 😀

This therefore means that even though Devi as SkandaMata might *seem* very different iconographically to the preceding (warrior & regal) Aspects of Mata JI, insofar as She does not obviously appear to be armed or equipped with the (other) accouterments of rulership … seated there in Her lap and steadied by Her hand is a very powerful weapon indeed – the infant Lord Skanda! And is in any case accompanied as ever by Dawon, Her mount – after all, ‘Bravery’ [for such His name means] is a most necessary and powerful weapon indeed. 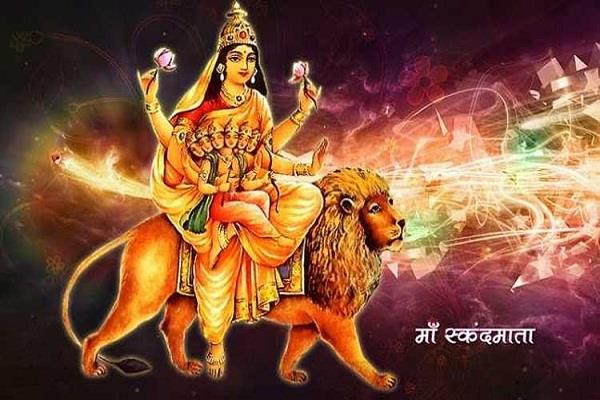 Her other hands (of which there are usually three) customarily bear lotus flowers and the Mudra of Abhaya; although some other depictions have other elements in the mix such as the instruments of piety we have previously seen (i.e. a bell, a liquid-bearing vessel etc.).

We pray to Ma as SkandaMata, both to honour Her as a Mother (especially, obviously, as Lord Skanda’s Mother – additionally as this is also Her once again looking after *all of us* via a creative approach to the slaying of the demonic), and to honour the role and responsibility of Motherhood more generally; and, it does bear noting, to worship Lord Skanda as well – not just because there He is seated in Her Lap … but because it is surely a high form of respect indeed to respect and honour somebody’s Mother.

We also pray to Ma as SkandaMata in order to ask Her to bless us with the virtues which She embodies – the greatness of spirit and charity as She displayed by accepting Lord Skanda into Her household despite His previous circumstances (and, the forbearance and forgiveness of Lord Agni, into the bargain, if one has that telling of the myth in mind, I suppose); the blessing of fertility and prosperity; the ’empowerment’ which She has given, not least as symbol-in-flesh via Her Son; and the Clarity and Guidance which She possesses and can dispense for the Devotee as Her child also, just as She has done for Lord Skanda. No doubt, also, the amazing strength (of character, of will, and when Her offspring are perceived to be under threat) of the Mother is a mighty boon indeed.

In short, whether one is a Mother, one has a Mother, or one wishes to be guided and protected, supported and strengthened, and empowered to live in a virtuous way with regard to those of us around us to whom we owe the twin duties of ‘care’ and ‘community’ .. She is a most amazing and worthy Aspect of Mata JI to be honoured.