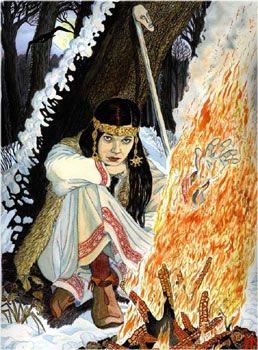 Excerpt from yesterday’s Kushmanda #NavRatri piece, illustrating what I believe to have been a core – yet understated in Western developments – element of Indo-European cosmology/theology, preserved most prominently amidst both the Scythian and some Hindu understandings; presented on its own because it’s a rather important mythographic point that is deserving of a highlighted presentation. [Or, perhaps more cynically, because I’m not sure people without a specialist Shakta Hindu enthusiasm were reading through the several thousand words to get to this point that’s of a more general interest and saliency]
“Both of these attain further comparative relevancy when we consider the Tabiti Goddess said to have been the head of the Pantheon of the Scythians. “Tabiti” being regarded as not only Queen of the Gods and strongly correlated with Sovereignty, but as having connection to the ordering of the domain, and piety-through-flame. This is further substantiated via the linguistic connection to Sanskrit “Tapa” (heat, glow, the Sun, Indra/Lord), and thence “Tapas” (heat, but also Penance/Religious Austerity, the period between Winter and the start of Spring), all from Proto-Indo-European “Tep”, thence “Tepos”, referring to ‘heat’ and ‘warmth’.
It is not hard to see how the concept of a Hearth-Fire [Tabiti being linked to Hestia in Greek accountings] in an older (Steppe) dwelling is regarded as strongly coterminous with the making of a structure into a ‘house’ into a ‘home’ – and with this investiture, producing a regal dominion over the space thusly ensconsed at the center of, and about which all other activities within the structure must therefore be conducted, particularly in winter’s cold and dark and sleet and snow. On a broader level, societies themselves can organize about the central sacrificial rites which must, themselves, *also* contain and entail a Sacrificial Pyre (something which, to bring it back to the Household once more, we perhaps see in the circular processional about the Sacred Fire which forms the integral binding of the Hindu marriage rite. A family, a household, after all, being the building-block of the community entire – its re-creation and perpetuation/furtherance being a function of these perambulations about the central Flame). The Sky, the Universe Entire, is also – after a certain form – a Steppe, a Steppe of Space; and therefore, our home, our dwelling, the Gods’s dominion over same, is *also* to be regarded as organized about this central pillar (which is actually a sphere, considered only within our dimensions, rather than as arcening down from Above and Beyond (via the Source of its ultimate Energy), perhaps like the Jyotirlingam, the Lingodbhava, and also recalling the Sacrificial Post/Pillar that forms the *other* integral element to Older Indo-European Religious Rites and Cosmological Structure – that Axis Mundi concept, again, you see?), this central pyre that lies at the Heart and the Hearth of Their Heavenly Domain.”