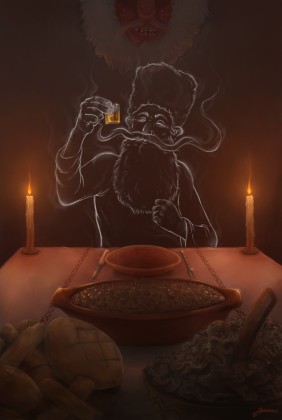 Tonight marks the last night of Pitru Paksha – the Fortnight of the Ancestors; and is also the MahaLaya event which precedes and forms a bridge with the NavRatri (Nine Nights) of Goddess Durga yet to come.

The purposes of this occasion, then, whether regarded as Sarva Pitru Amavasya, or as the ‘prelude’ to NavRatri, actually share something of a fundamental unity – even though on the surface, they may look rather different.

In the case of the former, the event is dedicated to the offering made to *all* the shades of the departed; and in the case of the latter, the observance is of the Great Devi, Durga, taking form and empowerment from the shared essences of the Gods in order to physically smite evil with ultra-violent light.

How are these the same principle in motion? Look closely. They are *both* cases of pious action undertaken by individuals, groupings (whether the still-yet-living mortals or the Gods assembled together for this purpose) – which are directed ultimately *outward* towards the general benefit and welfare of *all* the worlds’ dwellers. And accomplished, as ever, through offerings of light and substance made towards the asa-radiant power that presides above and precedes over all – in the former case, often via Surya, and in the latter case, as refracted through a number of intermediaries [including, as we shall see upon Night Four, Kushmanda-via-Surya] back up to the Source of All.

But let us speak specifically about each tradition that takes place today.

First, the close of Pitru Paksha; the Fortnight wherein the shades of our forebears come to visit us, as the spaces between the worlds draw nearer than usual; and are treated as honoured guests within our homes and our hearts over the course of that time.

Whereas the preceding fortnight has largely been devoted to the making of offerings and oblations to one’s departed ancestors; this Last Night, when the Moon is Dark before it can grow again, is instead given over to the provision for *all* the shades of the dead – hence the “Sarva” in the observance’s name.

Via way of explication for the underlying reasoning of the tradition, let me quote from my earlier works:

“A tale told about the character of Karna, from the Mahabharat, illustrates this, and also provides one explanation for Pitru Paksha as a whole. According to this tradition, upon Karna’s death and ascension to the afterlife, he found himself asking of the relevant God whose domain it was for food … and being presented, in response, with gold. Karna was surprised by this, and pointed out that he couldn’t eat gold, and asked why it was being offered to him; to which he was told that while he had indeed been conspicuously generous in life in his *monetary* offerings to Temple and the Gods and such … he had never made offerings of food. He was therefore ‘reaping as he had sown’ – as he could only be given in the afterlife what either he himself or his descendents had given.

A slight variation upon this has the explanation as being that Karna had never offered food and water to his Pitrs while he was alive … which, while it may sound egregious, unforgivable, and abominable now, was arguably in fact the result of the circumstances of his birth and abandonment by his mother – meaning he had never known his Pitrs in the first place to be able to make the appropriate offerings.

To make matters worse, due to the death of all of Karna’s sons in the Mahabharat War, there were therefore now no longer any descendents who might ‘fill the void’ and provide for him from the world of the living.

Karna therefore beseeches the God in question – often identified as Lord Yama (which would potentially make Karna His half-brother), although I have also seen it stated as Lord Indra – to be allowed to return to Earth to attempt to make things right.

Depending on which version of the story one reads, this either entails Karna using the two weeks he is given here on Earth to perform the rites for his Pitrs (and therefore also himself) that he should have been doing the last time he was here; or alternatively it involves him spending the time feeding the poor and engaged in other acts of piety. In another (potentially somewhat darker) telling, it is said that upon his (temporary) return from the dead, the king frantically attempts to popularize the concept of providing food and water to the shades of one’s ancestors in order to avert others from experiencing the same deleterious circumstances which he had after death.

However it played out, it should come as no surprise to find that these fourteen days are often regarded as being the same point of the year as Pitru Paksha. Although as a brief note of hope, Lord Yama in His Mercy is stated in some sources to have decreed that on Mahalaya Amavasa (the last day, where there is no moon), the offerings will benefit *all* departed souls; thus in part avoiding the problem encountered by Karna – provided, of course, that offerings continue to be made in the first place!”

As one can see, this is an action wherein the otherwise highly *specific* pathways of devotional action from the preceding fortnight are now broadened out to be, in effect and hoped-for ambit, somewhat more all-encompassing. And, as we know from the operation of the law of Karma via the parable of Lord Indra’s Net … the hoped-for benefit of this generalized virtuous conduct, via improving the overarching moral and metaphysical situation of the universe at-large, shall eventually *also* arcen back to you, should you require it.

In a way, I suppose, you could think of it as ‘hedging one’s bets’ via a combination of Pascal’s Wager and Prisoner’s Dilemma. It’s Pascal’s Wager, as we are taking the gamble that when we find ourselves in the waiting-room of eternity having shuffled off this mortal coil … we shall be provided for and looked after by our descendants. But then protecting ourselves from the prospect of this *not* transpiring (either because our descendants have forgotten us, or are simply unable to perform the relevant and required rites … or, perhaps, because we for whatever reason have no descendants, living or otherwise), through this generalized mechanism for the spiritual welfare.

As in, both the welfare of the spirits – and also, through the morally positive impacts upon one’s character and soul from having undertaken proper and righteous conduct with good motivations in mind, the spiritual welfare of ourselves, into the bargain.

It’s Prisoner’s Dilemma, because the best move is to *co-operate* – both across generations, and in a more general sense, between people still breathing as well (it ultimately honours *all* our dead, and eventually, ourselves as well) ; while in a situation wherein one ‘co-operates’ but the other ‘cheats’, then the overall net welfare is severely impinged, breaking down significantly further if *both* neglect their moral duties.

The institution of traditions designed to re-inform us and thence re-immanentize what *proper* moral conduct is, therefore, helps considerably by reducing problems and quandries such as these to “previously solved problems” – and by assisting in the overcoming of ‘collective action problems’ that are engendered by the difficulties inherent in intersubjectivity, through providing shared moral and informational (and, indeed, empathic) basis through which to guide and induce action.

Which brings us on to the MahaLaya Devi mythocurrence that is contemporaneously observed in various parts of India.

Now, I should probably at this point note that my interpretation of the pre-saging of the MahishasuraMardini occurrence is a bit deepa than the direct and literal words of the scripture themselves would imply upon a plain and ordinary reading. This is, I suspect, strongly intentional – as there are ‘gaps’ within the ‘literal’ interpretation that seem to so snugly fit the *other* and often far older elements which I bring to it, that it is akin to a key in a lock, opening up a far grander and more Powerful [Shakta, indeed] revelation in the process.

I shall perhaps detail this further, with proper citations, in a subsequent piece – as this one is quite lengthy already for what’s supposed to be a brief two-topic-combined introductional.

But suffice to say, the ‘literal’ rendering has the various Gods coming together, pooling Their radiant might and weaponry, to form a ‘mountain of light’ that is the Warrior Goddess, to slay the buffalo-headed demon whom They have been unable to halt.

And that is great, for what it is – but it misses something. Namely, looking at it *directly*, what you wind up with is people coming away from it assuming that the Goddess is ‘merely’ the emanation of the shared power of other Gods; the creation of, often male Divinity, and a servant to Their inestimable Will.

Whereas what is *actually* going on, once we read this in concert especially with the famed Devi Suktam of the RigVeda, and its shared elements of the Devi Upanishad etc. – is the Power [Shakti, indeed] which Devi has emanated out and *invested* in these Gods, the Universe as a whole (at a ‘background’ level, which *is* the fabric of reality itself, according to certain readings .. concentrated and pooled in particular areas, elements, beings, more so than others – and *particularly* in HER Chosen Champions and Higher Harjas – HiranyaHarja, now *that’s* #NAS ! ) … that Power is being *returned* TO Her.

AdiShakti, AdiParaShakti, in other words, is ‘reaching back into our world’ in more high-light form, in order to set to right the Order of the Universe [the immanentized state of Rta, which Mahishasura had thrown out of balance and thusly into peril, along with everything – and I do mean ‘everything’ – as well, in consequence and as a result].

In this way, what is going on here, and what is observed upon this Night (especially amongst the Bengalis, who are ever renowned for the strength and luminosity of their Durga piety), is much the same as what is connoted and venerated upon the last night of NavaRatri – Siddhidhatri’s Night. But more upon *that* when we come to it, in a few nights’ time.

The overarching point – for it is, indeed, an ‘archet’, a *bow*, a *weapon*, and “arete” in the Ancient Greek sense – is that these are instances of people, of beings, of Gods Themselves, *coming together*, and undertaking these *collective actions* of piety and of the caring maintenance of the Universal, Divine Order [Dharma & Rta Combined], in a mode and in a manner that re-enacts previous Great Actions that can and have benefited us all.

It is the Eternal Return, as carried out by Gods and Mortals, and to service of both the Eternal One and the Ones Now Beyond Death.

As I have often been known to say, in times of darkness and iniquity, rather than simply cursing the circumstance – it is better to light the flamethrower. A veer-y useful theological implement and/or metaphor, indeed.

For it dispels darkness/occlusion *and* it kills demons – often, *at the same time* !

And so, therefore, as you carry out the rites to the Pitrs, the forebears of all … and also, the ritual honorific processes via which the Mother of All is welcomed back into the world, have in mind that these are both forms of the same ultimate actions.

And that the essential unity of all conduct, should ultimately be towards the same purpose.

Krinvanto Vishvam Aryam, it is said in the Vedas. Accomplished via all sorts of noble and morally upright actions. And therefore augmenting the Divine Strength, to slay those who would attempt to usurp, upset, despoil, and denigrate both such Righteous Conduct, and indeed the veer-y fabric and immanence of Righteousness within this Universe, Itself.

Honour Your Ancestors – Honour The Goddess
Help The Dead – Help The Living
Make the Worlds – on *all* sides of the Kaal-Veil of Life and Dying – A Brighter, Righter Place.