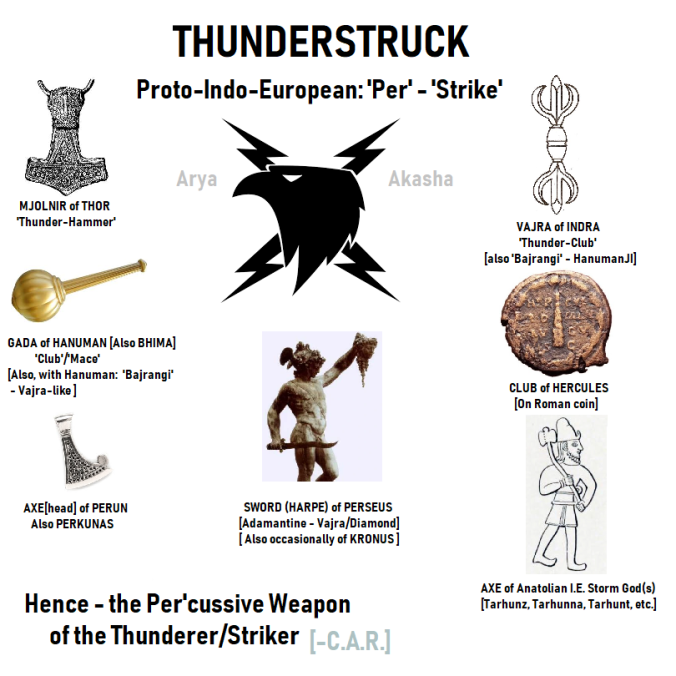 “Appropriate for Thursday, – a brief look at the Weapon of the Thunderer/Striker in various Indo-European mythologies.

Now, there’s quite a bit that could be said and unpacked about the differences between each of these mighty weapons, especially as the cultures in question continued to develop their own mythological corpuses and legendariums over the millennia … but what I keep coming back to is the striking similarities that we continue to see, even despite this.

In each case, what we have is a weapon that transforms the mighty strength-of-the-arm of its bearer into percussive force; which generates a concussive blow, and oft-times sparks, upon striking. In some cases, these are relatively simple implements – literally ‘just’ a tree-branch [which may itself encode yet further saliency, given the rather close linkage, etymologically and theologically, between Thunderer/Striker figures and trees]; or, somewhat more sophisticatedly, a length of stave that has had an instrument of enhancement such as a weighty mace-head or axe-head placed upon it. In others, it goes further still, and becomes a proto-Sword form – as we can see with the Harpe weapon carried by Perseus [‘Striker’] and potentially Kronus [recall Kronus as Son of a Sky Father, Ouranos, from this morning’s comparative diagram].

Of further interest, are some of the materials thought to be utilized in their construction. “Vajra” would earlier have been translated mostly as “Lightning”, “Thunderbolt”, ‘Storm-(Divine-) Force” … however, it *also* came to be associated with the concept of “indestructibility”, and in later Sanskrit, with Diamonds, as a result. Adamantium, as we know, is similarly construed – both directly associated with the concept of being unutterably hard, and in later interpretations, diamonds and suchlike; although its original etymology also, rather interestingly, contains a hint of ‘untameable’ to it, as well. Most fitting for the Storm Lord.

However, we also see accounts – turning up in both Greek, and if memory serves, Balto-Slavic sources, associating the weapon in question with Flint. The reasoning for this ought not be hard to fathom – partially its hardness, and partially its ability to strike sparks, start fires, just as Thunderbolts are wont to do.

Yet where this gets perhaps a little surprising, is in the fragmentary accounts preserved in those Northern regions, of a ‘Sky of Stone’ , i.e. stones *from* the Sky, a more lengthy investigation of which is something I should do at a later date.

For now, we’ll just note that there’s *also* several RigVedic attestations for what effectively amounts to a ‘Meteor-Strike’ being carried out as a weapon of warfare … and that it’s still, to this day, often the case that more recent ritual Vajra implements are made from meteoric iron [which, after all, would have been one of the few sources of workable iron prior to some serious technical advances; and when it comes down, does produce quite the sonic boom and streaking shape of light!]; and, further, that often these hammers, axes, maces, and clubs seem to find themselves *thrown* at an opponent, in the course and the corpuses of their relevant mythological occurrences.

So there you have it.