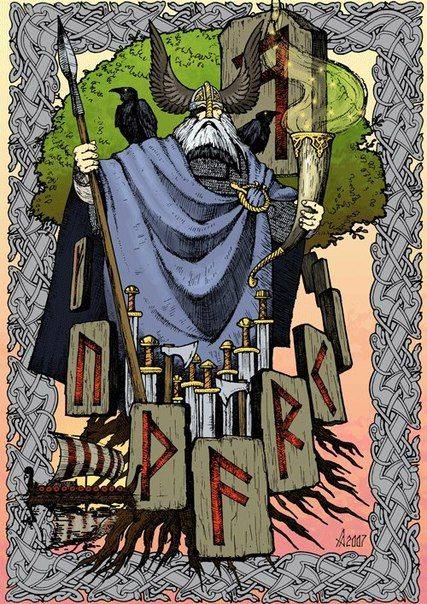 The heralded intent of the Swedish government to attempt to “ban” Runes, and more broadly other heritage/religious elements on grounds that they might “look” Neo-Nazi, must be *absolutely* opposed.

Before proceeding further, and lest I be (wilfully) misinterpreted, I shall say one thing. I am no fan of Neo-Nazis, and have regularly found that some of the most obstinate and ridiculous of outright *intentional* distorters and perverters of our area of expertise here at Arya Akasha and #NAS, have come from within their ranks.

This is a pattern which continues the legacy of various *actual* Nazis from the 1930s and 40s – who appeared to run around with what I have termed a “Headcanon: ACCEPTED” approach to pretty much anything pertaining to the Indo-European peoples and ways. Hence, ridiculous claims made at the time that “Brahmins are Jews” [and therefore that Hindu texts should be “de-Brahminized” or whatever in order to provide “Aryan authenticity” – which is an absolute inversion of reality!]; and on the Nordic front, the attempted popularization of the so-called “Armanen runes” in preference of actual and authentic Runic tradition. [A full discursion on Why Guido von List Basically Did Not Care About Authentic Religion Or Heritage is beyond the scope of this piece – just take my word for it].

I therefore am not penning this in order to attempt to defend (Neo-)Nazi utilization of Runes, any more than I – a pious Hindu – would be especially keen upon Neo-Nazi co-option of any of our symbols, such as the Swastika, or even the very word “Aryan”.

But you see, this is the problem: If you endeavour to outlaw Runes, then only Outlaws shall have Them. And I am not meaning “outlaw”, here, in its sense as “Vratya” [referencing our #NASservation around the ancient Vratya of India as both ‘Outlaws’ directly translated, as well as ‘Word-Warriors’, more figuratively rendered; and also a rather pointed oblique allusion to a certain Other Figure]; but rather, to the political and apparently legal undesirables of these ‘Far-Right’ political currents.

By attempting to ‘marginalize’ and ‘push to the fringes’ foundational elements of heritage and history, you all but ensure that not only will the wilful distorters of them who are found *at the margins* will have exclusive and uncontested claim to Them … but also that any seeking to encounter their own culture and heritage, shall inexorably be driven to seek out these fringe-dwellers as the now all but exclusive possession and (mis-)users of the symbols and other elements in question.

[On a brief side-note, and before persons from both sides of *that* debate jump upon the metaphor I opened with above … I am not here attempting to make some form of broader analogous point around firearm-ownership restrictions. Runes, and by extension, Words and Speech more broadly, *are* a mighty weapon [and we have the RigVedic Hymnal citation for Vac [‘Voice’ – or, more figuratively, I suppose, ‘communication’] as the *most powerful* Weapon – as it is also the force which can reshape reality with but an utterance; yet they are also ‘intangible’, and much harder to genuinely or meaningfully police the possession of. How do you excise the contents of someone’s mind? Erase their memory to remove knowledge and thereby completely prevent its transmission in secret?

The answer, of course, is that you attempt to ‘over-write’ what is already there – and thus ensure that any subsequent recollection or further reproduction will be ‘twisted’, and therefore something somewhat or entirely different from its previous, initial form. Orwell phrased this as “Newspeak”. And I suppose you could also class the insistence that any and every “Runic” symbol (except, one presumes, the Bluetooth corporate logo and device-icon) is axiomatically a heraldic insignia of (Neo-Nazi) ‘hate’, as a similar exercise in memetic-supplantation fur kulturkampfen purposes]

Further, even beyond what has been said above, there is no getting around the fact that the Runes, especially of the Elder Futhark, represent a fundamental and intrinsic element of Scandinavian heritage. And an irreducible component of a yet-living suite of religious movements.

To attempt to cut Them out from the heart of your history and, indeed, your present and your future, due to the would-be corruption and co-option perpetrated by a few (the incredible vast majority of time, not even located in Sweden), seems utterly abominable to me.

It is not ‘fit for purpose’, as it shall only have likely very limited effect upon “Neo-Nazis”. And instead, as I have said, mostly merely makes criminals out of those genuinely interested in their heritage, and those authentically practicing a (minority) religion.

I am also genuinely quite concerned about the ‘further steps’ which may ensue from such a move. As I have mentioned elsewhere and in more detail, we have already seen an effort at having the Swastika “banned” from the Kumbh Mela religious festival in India this year. It is the world’s largest gathering of Hindus, and goes back centuries. The symbol, meanwhile, has an easily authenticable lineage of occurrence and significance/saliency spanning some thousands of years, and not even ‘just’ in Hindu use.

Yet because of the Nazis, and their self-declared ideological successors, you had a push from people outside India to outlaw a Hindu symbol at a Hindu occurrence in the very heartland of Hinduism.

A similar argument has been mounted here in New Zealand, upon occasions when curmudgeons and Christian-supremacists have objected to Hindus having Swastikas visible on their properties – or, in one case, putting up an entirely legal Murti of Lord Shiva outside, that didn’t even have any obvious Swastikas upon it. [I am also anticipating a comparable situation for the Gyan mudra [hand-gesture] that somewhat frequently occurs in our iconography and practice – as it looks like a certain “white power hand sign” that Stephen Fry of all people was just attacked in the media for apparently making]

If we are to go down this morally moribund trajectory, would it not be simpler to ask for the banning of the religion in question all up.

Certainly, it would be far ‘easier’ in some senses, to attempt to criminalize the speaking of Sanskrit in these places, than to attempt to meaningfully discern whether somebody using the word “Aryan” is a pious Hindu (yes, there are even some white ones – apparently soon to become more “Ghora” than “Gora” in the eyes of certain of their countrymen) rather than a dangerous subversive political extremist or ‘white nationalist’.

But why stop there? Neo-Nazis and Fascists often spread their propaganda by writing in English, using ‘Roman’ characters and Christian elements. ISIS recruits using Arabic, and deploying notionally Islamic religious concepts. Shall these, too, be barred from public nor private use? Does the memetic adoption of “Deus Vult” necessitate the barring of Latin from Catholic liturgy ? (There’s probably a Vatican II joke in there somewhere) Does the occurrence of the word “Democratic” in “Democratic People’s Republic of Korea” mean we shall now seek, too, the outlawry of the very concept (or even just the word (of)) ‘Democracy’?

Runestones remain studded in the ground throughout Scandinavia. Shall they now be ‘uprooted’, in some form of ‘cultural revolution’ style iconoclasm, lest they become still-living signs of resistance against the McWorld-ist and probably implicitly ‘liberal’ Atheist attempts to first distance and then deconnect entirely, a people from its heritage?

How about the many Roman relics – the archaeological and architectural wonders which yet still stand even in the streets of Italy and other European countries as well as in museums half the world over. These have been, and occasionally still are, regarded as potent symbols of ‘Fascist’ inspiration – the Ara Pacis Augustae, in particular, was ‘restored’ and protectively housed for public display by none other than Mussolini. Shall these, too, be subjected to a Damnatio Memoriae, the Colosseum and Trajan’s Column dismantled ‘stone by stone’ til an unutterable and gravely almost-imaginable cultural desert, a dead-land, a wasteland has been in their place wrought, and surely facetiously termed “unproblematic” “peace” ?

Or are we better than that. Capable of appreciating the position that the best ‘antidote’ to the poisonous (mis-)use and corruption of religious and heritage elements, is to counter this with the proper and hallowed-via-authenticity exaltation of these elements instead.

Putting my religious fundamentalist zealot helmet back on (not that it had ever left my head), one vitally important Mythic Truth also occurs:

The Runes were not ‘created’ by ordinary human hand. (In fact, there is a rather good argument that They were not ‘created’ by Divine Hand, either – instead being more accurately thought of as ‘received’, ‘discovered’, ‘divined’ … ‘Shruti’ (श्रुति), as we would say in Sanskrit; on the basis that They represent something fundamental and intrinsic to the fabric of Reality Itself, and beyond)

They can therefore not be *destroyed* or otherwise ‘obviated’ by human hand, particularly not through merely temporarily mighty politician’s proclamation.

To insist upon this incredibly arrogant and unctuously presumptuous effort to do otherwise, is to actively court disaster.

A great and terrible curse, indeed – the erasure of a people. And not (necessarily) in any exclusively ‘supernatural’ or visually dramatic sfx sense, either. Even if this proposed law-change, and its lugubriously logical successors were to come into force, there would likely still remain humans living in Scandinavia.

Yet there is only so far you can go, with the forcible erasure of history and heritage, before they would indelibly be said to have stopped being Swedes.

As I have said voluminously both earlier and elsewhere, I am no fan of Neo-Nazis and related edge-dwellers choosing to distort, to co-opt, and appropriate elements of authentic religious and cultural occurrence. Indeed, a not-insignificant part of what I/we do, and why we do it, here at Arya Akasha and the Nordic-Aryan Sangha , is because we are are genuinely furious at the ongoing malefic misuse of what is precious to us – literally sacrosanct – by these sorts of people in service of their occasionally outright demonic agendas.

Against them, we must – and do – defend.

But not so are they our only foe.

Those allegedly well-intended iconoclasts from the notionally more ‘liberal’ end of the spectrum, who evidently seek to perpetuate the lie that Runes, Swastikas, or an enthusiasm for one’s ancestral heritage and living, vital (in many senses of the term) religion … are all somehow axiomatically, intrinsically, and irreducibly “Nazi” or otherwise “objectionable” … they, too, have earned our *entirely deserved* ire.

We are therefore, it seems, all but ‘surrounded’. Under attack from and subjected to siege by ‘extremists’ from almost all sides. (Who curiously, as it happens, often seem in actuality to agree about a great many things)

Good. That concentrates most everybody we’ve got a problem with in roughly the same place, for easier disposal. And besides which, means we shall be able to advance in *any* direction.