Given that today is April Fools day and I keep seeing things linking it to the worship of Loki, Let me take a moment to address that.

The origins of April Fools can be traced back to worship of the Celtic deity Gwydion in honor of the time when he conjured some armies to trick Aranrhod into arming Lleu. The details on this particular incident can be found in its own article here: https://aryaakasha.wordpress.com/2017/04/01/a-brief-elucidation-on-the-celtic-origin-of-april-fools-day/

Now unlike Gwydion there is something particularly important to note about the worship of Loki, namely the fact that it never existed at all. No worship or religious rites have ever been recorded about Loki among the Germanic peoples of any time period. No pendants or amulets have ever been discovered in his likeness or temples dedicated to the deity in any form. There have been no recorded place names or baby names featuring Loki in any of the various strands of the Germanic peoples across time and space, no evidence of any sort of worship or veneration of any kind.

Loki is neither a god in general nor a god of trickery. He is perhaps best known for his unique heritage among the Aesir, and that is because Loki is patrilineally a Jotun (Giant). Loki’s Father is the Giant Farbauti and his Mother is a member of the Aesir and her name is Laufey, and he was fostered among her family and raised in Asgard (Not an uncommon practice, culturally speaking, for the Germanic people.). The indication that he is always referred to as “Laufey’s Son” can perhaps be taken to mean that he was raised to identify primarily with his Aesir heritage and that the gods meant to confirm this tie of kinship in the minds of Asgards other inhabitants.

However, due to Loki’s heritage and the patrilineal practices of the Germanic people, he cannot be considered in the same light as the others, he is neither a Vanir nor an Aesir, and just like these deities heritage reveals itself in personality and moods and abilities, so too does Loki’s extant Jotun Lineage separate him from the others into his own category. The myth can perhaps be taken as an example of the nature of Frith and Othala, that even though Loki was raised among the Aesir as one of his own, he will always be Jotnar and will at the end of the day fight amongst his own kin against the very people who raised him and the place he once called home.

Loki does what he does because he is fundamentally incapable of understanding the concepts of law or Order, because unlike the rest of the Aesir, he has a different heritage that impacts the way he views the world that forces him down the same paths as the rest of his Kin, and no matter where he was raised, who his friends are or how much he tries, he cannot be anything but a Jotun.

We will examine three of the stories regarding Loki to show the depths of his character and the manifestation of the difference in his heritage.

The first story that I will summarise is “The Fortification of Asgard” which can be found in the Gylfaginning – Prose Edda and read in full detail there. The basis of this tale occurs when the gods had established Midgard and built Val-Hall and an unnamed builder who has offered to build a fortification for the gods that will keep out invaders in exchange for the goddess Freyja, the sun, and the moon arrives among them.

After some debate, the gods agree to this, but place a number of restrictions on the builder, including that he must complete the work within three seasons with the help of no man. The builder makes a single request; that he may have help from his stallion Svaðilfari, and due to Loki advising the council of gods in this manner, this is allowed. The stallion Svaðilfari performs twice the deeds of strength as the builder, and hauls enormous rocks to the surprise of the gods. The builder, with Svaðilfari, makes fast progress on the wall, and three days before the deadline of summer, the builder was nearly at the entrance to the fortification. The gods convened, and figured out who was responsible, which resulted in a unanimous agreement that, along with most trouble, Loki was to blame. 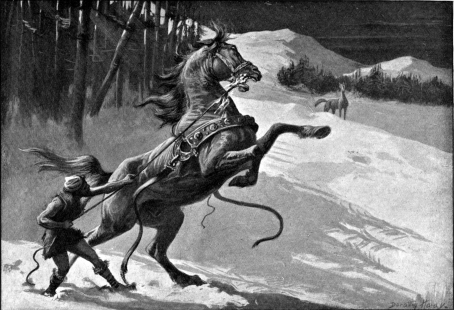 The gods declare that Loki would deserve a horrible death if he could not find a scheme that would cause the builder to forfeit his payment, and threatened to attack him. Loki, afraid, swore oaths that he would devise a scheme to cause the builder to forfeit the payment, whatever it would cost himself. That night, the builder drove out to fetch stone with his stallion Svaðilfari, and out from a wood ran a mare. The mare neighs at Svaðilfari, and that the mare was in heat Svaðilfari becomes frantic, neighs, tears apart his tack, and runs towards the mare. The mare runs to the wood, Svaðilfari follows, and the builder chases after. The two horses run around all night, causing the building work to be held up for the night, and the previous momentum of building work that the builder had been able to maintain is not continued.

When the Æsir realize that the builder is a hrimthurs (Ice Giant), they disregard their previous oaths with the builder, and call for Thor. Thor arrives, and kills the builder by smashing the builder’s skull into shards with Mjöllnir. However, Loki “had such dealings” with Svaðilfari that “somewhat later” Loki gave birth to a gray foal with eight legs; the horse Sleipnir, “the best horse among gods and men”

Now we can see from the story that contrary to the common notions of Loki being a “Trickster” or somewhat joyous figure, he is rather one who has set out to deliberately miscouncil his foster-kin in favor of men of his own blood, and a coward to boot. The story is also important in that it shows Loki’s errant nature, that he is capable of getting pregnant from a stallion and giving birth to a child. The inhuman nature of this feat is something the Germanic people were quite concerned about, as it is evidence that Loki is “Ergi”, that he is unlike other men and prone to unmanly actions.  I would reason that the cause of Loki’s Ergi is principally that he IS unlike the others of Asgard, he is a Jotun by heritage and prone to different rules.

The second story I will summarize here is the The Death of Baldr. In this tale the God Baldr, Son of Odin and heir to Asgard, is prophesied by his Father to be slain by the God Hodr and that Váli would take vengeance on Hodr. The Gods and Goddesses thought of all the things that might harm Baldr. His mother, Frigg, traveled the nine worlds and convinced each and every thing to swear an oath not to harm Baldr. The gods made sport of testing Baldr’s new safety. They threw darts and hacked with axes, but nothing could harm Baldr.

Loki was envious of Baldr. In the shape of an old woman, he learned from Frigg that she had missed one thing: the little harmless mistletoe bush. Loki found a mistletoe bush and turned a branch of it into a sharpened dart. Returning to the company of the gods, Loki found them throwing missiles against Baldr in sport. To one side was Höðr, Baldr’s blind brother. Loki asked Höðr why he wasn’t joining in the sport. Höðr said he had no dart, nor could he see to shoot it. Loki gave Höðr the mistletoe dart, and guided Höðr’s hand to throw the dart at Baldr. The dart flew through the hall and struck Baldr. It pierced him and passed right through him. Baldr fell over on his face. He was dead.

This would be an example dispelling the notions of Loki as a happy-go-lucky trickster deity, or some kind of misunderstood joyful figure. In the story he very explicitly and knowingly causes the death of the most beloved of the Gods and eventually Ragnarok himself. I would add that this can also be interpreted as Loki deliberately aiding his own Kin against his Foster family.

In the Third Story I will summarize an account alluded to by Loki in the Lokasenna. Once Odin had been abroad for a very long time, as was his frequent want, but he had been gone for such a long time that the other Gods has begun to fear that he was slain and would not return. Loki councils Odin’s brothers Vili and Ve that they should take up the kingship and rule together, taking Frigg as their mutual wife for a sense of royal continuity (Likely a common custom, for a new king to marry the wife of the old one, especially if they be brothers).

This occurs and for a time all is well, until Odin returns to Asgard one day and seeks to reclaim his kingship over all therein. Surprised to see his Brothers ruling in his stead, Odin asks about this turn of events. The Gods explain the situation and that they feared that Odin was dead, all but Loki who spends the time trying to convince Odin that his two brothers had seized his throne the moment he was gone and that Frigg had whored herself out to retain her position. Given the council of all present, Odin decided that Loki’s version of the story was untrue and he reclaimed his place as normal.

Again we can see the almost malicious nature of Loki here, attempting to get Odin’s brothers and Wife slain for a treachery he was culpable for to begin with. It is also here that I must make the point for why Odin and the others continually put up with Loki regardless of these happenings. It is because Loki is not consciously Evil or Malicious, rather his inability to understand the fundamentals of Law and Order and behave in the manner of a respectable man are all traceable back to his Blood and the notion that Loki is fundamentally different from the Gods of Asgard and thereby also from the men of Midgard. Loki is the proverbial Other, the Foreigner, those not within our Innangard (Kin Fence) and it is not a fault of his that he cannot understand the concepts by which men and gods live.