One theme I’ve attempted to weave into my work is “Indo-Europeanism For The Modern Age” – the notion, the concept that what we do is not merely “mythology”, in the sense of pouring over musty tomes [and/or online scan-uploads of same] to attempt to describe and detail the bygone beliefs of the far-ancient past (although it is *also* that); but *also* to look at how these elements from the past – or, as applies Hindu elements in particular, the “past-which-yet-lives” [in fact, in some was it is inadequate to refer to these as “the past”, as that implies a certain lack of saliency, of immanence to us here in the present. The “Ancient-And-Enduring” isn’t quite there, either. The “Ever-Living-Flame” might be getting closer – and not least due to the Tabiti deific we commented on briefly in my last week’s Cybele post; or the manner in which AdiParaShakti is above and beyond space and time, and intersects through all] – how these Indo-European elements are capable of turning up amidst our Modern World. Occasionally, indeed *especially* where we might not perhaps be expecting them!

So that brings us to this week’s piece. This is a fine fountain from a national capital, depicting Cybele – the Mountain Queen, Great Mother [Magna Mater], and a deity both embodying and concerned with the defence of the realm, the upholding of national identity and sovereignty. I’ve covered the deific complex in question in greater detail in several of my previous works [including the “Votive Plate of Cybele, Great Goddess, Mountain Mother – Arte-Facts #5” which was written last Friday, and the “BHARAT MATA AND THE INDO-EUROPEAN DEIFIC OF NATIONAL IDENTITY” piece I penned for Indian Independence Day the previous year], which will also explain how and why I’m taking a somewhat *broader* view on Cybele than some Classical era accounts might seem to directly contain.

But why am I finding this statue extraordinary? I mean, it is a physical representation of a deific complex whose iconographic, linguistic, and theological/mythological/portfolio coterminities stretch from Iceland to India – and that is undeniably pretty amazing! But why *this statue* in particular?

Well, it’s in Madrid (as you can probably tell by the Spanish flag), situated upon the City’s formerly eponymous plaza (since renamed from “de Madrid” to “de Cibeles”), and immediately outside the civic palace from which the city is governed. It is also, as it happens, apparently the site where the Real Madrid soccer team observes its sporting triumphs – with the captain of the team garlanding the statue with a flag and scarf of the team, and therefore their community (of whom some might say they are somewhat literal standard bearers, ‘defenders’, near embodiments more than representatives), and offering any trophies thusly accrued to the Goddess amidst major communal celebration. 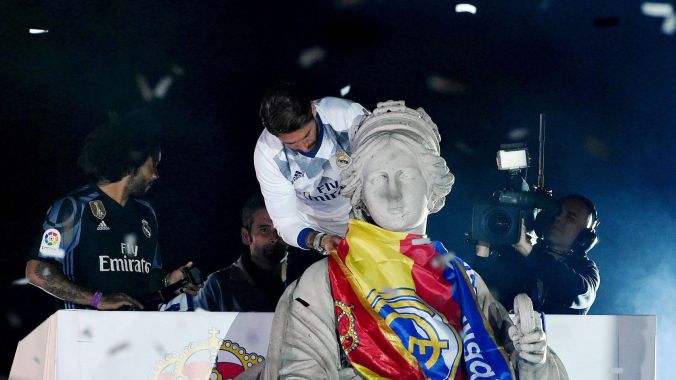 Or, to phrase it another way … we not only have an ancient deity regarded as closely connected to national, civic affairs, the heart of a community (and, in terms of the linguistics of the matter, as detailed in my previous works, seriously bound up with both mountains, and settlements/cities, and most especially both at once) – but Whose worship has generally encompassed the highest patriotism [see the worship of Bharat Mata in India for a contemporary, indeed *the* contemporary best possible example; or Athena of ancient Athens, perhaps, Who in many ways is running off the veer-y same deific complex]; and Who is specifically thanked for victories and other forms of deliverance, by the great men [indeed, in Latin terms, the “best men”, in some cases] of the country, the city-state. And Who is symbolically welcomed to the community She is hosted by in just such a manner.

Now, just as we often fail to give the people of antiquity due credit for knowing things that we know now, and assume they just *happened* to do this or that without actually knowing the surprisingly sound reasons *why* that we can now observe … so, too, is it the case that sometimes we don’t give *modern* people the proper credit for knowing why it is they do something.

And, to be sure, sometimes they *don’t* – it’s just something that’s been passed down, and which they are now ignorant of the underlying archaic purpose(s) thereof, or it is something that they have (re-)developed in a manner that now bears clear resemblance to the older elements, without their quite knowing *why* they’ve done it, and just acting upon some deepa subconscious guiding force, so to speak. Mythic Reality tends to shape regular reality, within its bounds, without the former ever having to make itself even semi-apparent to the latter. It just *Is*.

So in this spirit, I’m not quite sure how much of the above was *intended* or is consciously undertaken today, by the people of Madrid and their illustrious soccer team, with a view to the direct emulation of something Ancient, something True. Or whether it is the case that some things just ‘felt right’ and so they went with them; and the city changed itself around this eminent statue. 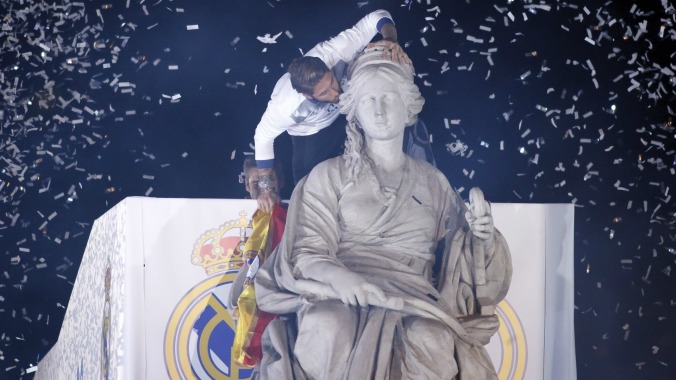 Certainly, the fact that the statue was designed and sculpted in the late 1700s [the former, in 1777 by Ventura Rodríguez, Francisco Gutierrez, Roberto Michel, and Miguel Jimenez; the latter process being completed in 1782, installed 1794], would lend credence to the notion that *somebody* knew what was going on … and yet, it wasn’t until several decades *after* the statue’s unveiling that the area around it began to become an important civic center. Indeed, prior to this, it had spent much more time either as the fringes of the growing city, or as a Royal retreat situated thereupon.

It would be more than a hundred years before the building that is currently designated the Palacio de Cibeles was actually even begun [the first stone being lain in 1907, the opening in 1919]; and then more than a hundred more before it would be bear the name [2011] – a change which was instituted only a few years after it had been turned from one of the world’s most impressive postal offices [technically a broader telecommunications hub – including still running telegraphs into the late 1980s] into a civic building with the relocation of the Madrid civil center from the Casa de la Villa in 2007. 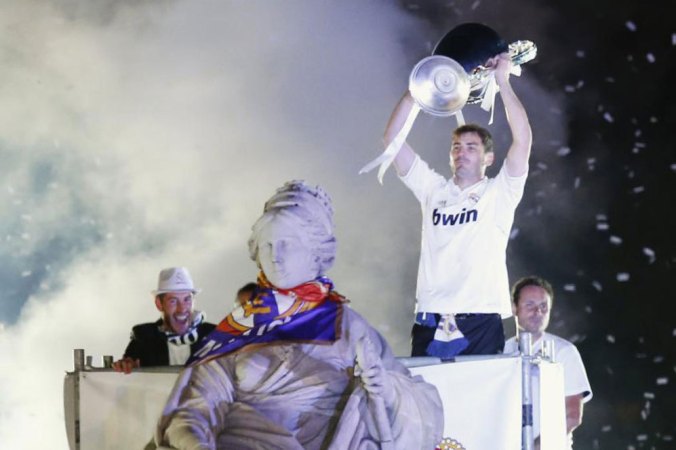 Real Madrid, meanwhile, was only founded as a club in 1902; and appear to have had any significant association with the statue until 1986 (or, roughly two hundred years after its creation and installation), when the significantly Real Madrid-ian Spanish national team’s unexpected ascent to the quarter finals of that year’s soccer world cup appears to have triggered spontaneous celebrations at (and in) the site of the statue and fountain. A situation which was then repeated during the next year’s European Cup semi-finals. And on it went [although admittedly, going *heavily* awry following a 1993 loss – wherein drunk hoodlums broke off and carried away one of the statue’s arms, to general outrage and uproar]. [As a point of comparative interest, a rival team from the same city – Atletico Madrid – has since adopted a Neptune statue some distance down the road, as its own equivalent … which has a ‘resonance’ when we consider the potentially somewhat ‘competitive’ relationship in Phrygian mythology between Cybele and their Sky Father representation; and before somebody writes in to correct me upon this point, Neptune, running off the Proto-Indo-European “Neb” particle as well as other supporting evidence, is strongly contendable to be part of the Classical ‘triple-aspect’ refraction of Sky Father, along with Zeus/Jupiter and Hades/Pluto/Dis Pater]

My point, then, is a simple one.

It would have made a certain sense for the Cybele statue to have been placed at the heart of a burgeoning civic center, deliberately connoted and deployed to become an icon of the polis, and a symbol of its collective identity, to be propitiated also with the frenzied ecstasy of that community in triumph while garlanded with its insignia and offered up its trophies, accompanied by its civic heroes … and casting a watchful eye upon its duly empowered functionaries and leaders.

But that is *not* what happened. Not intentionally, nor by mortal direct design, anyway.

*Instead*, the veer-y opposite appears to have occurred.

The statue of Cybele was placed, and then over the course of the next two centuries or so, the civic and communidentity elements of Madrid *moved *to* Her*.

It may have taken more than two hundred years … but all of this quite naturally eventually occurred. It takes time, after all, to cultivate, sculpt and grow a ‘bonsai mountain’.

As I say, I doubt how much of this was ever actually consciously *intended* by anybody, at any stage of the above process – or at least, anybody merely human.

But this is not how Myth works. It can be *observed* as it is unfolding – more rarely, it can be *influenced* to some degree in how and where and when it might happen to unfold. Yet in reality, in Reality, it has an a-priori existence, the proverbial “life of its own” [and one(s) that it takes on, takes *for* its own, in just such the manner as we have seen, evidently, with the City of Madrid playing host and then *becoming* Host [in multiple senses of this term] to the mythic complex, the Myth in question].

Once Invoked, in fact even *before* it is invoked – intentionally and perspicaciously, or otherwise – events, places, and always, always *people*, begin to reorganize themselves in a manner that looks like but utterly isn’t “of their own accord” to better and more closely resonate, immanentize, resemble, and thence eventually (almost) to *be* , the Myth in question.

And perhaps, the not-entirely-ancient maxim of Vox Populi Est Vox Dei rather in mind, it is the case that these larger and less ‘structured’ bodies of people may be capable of picking up upon these ‘resonances’, thence resonating themselves, in ways that a smaller number of top-down directors would be less able or even willing to countenance.

Who, after all, would *intentionally* endeavour to set up a civic mythoreligious resurrection in the heart of a modern city, that would enfold the triumph rituals of apex sport along with the symbolism and the physical situation of governance …. in a manner that simultaneously re-enacts the distant past, and re-infuses these ancient ethoi into the present.

Well, I mean, *I* would – but within the realms of religious fundamentalist zealotry, this is pretty much par [or ‘pur’] for the course.

However it has eventuated, it is difficult in the extreme to look upon some of the accompanying photography of the Cybele statue in question, flanked by Spanish flags, spoken to directly by the worthies of the polis upon raised platform [interestingly *also* a frequent Cybele devotional architecture/ritualine element], backed by the architecture of city-governance, devotedly garlanded with Real Madrid ensigns, quite literally feted amidst what can only be described as a latter-day Triumph, in tribute and in thanks …

… and not feel that you are somehow glimpsing into something which has once more resonated out, just as it has done in the ancient world countless times over, from the Uppland Lokas of Myth and the Divine.

I can quite honestly state, when I started doing all of this, that I would not have anticipated citing, still much less with approval, a soccer tradition as excellent latter-day Indo-European-ism. Indeed, I would not even have thought to *look* in that direction, or anywhere *nearly* close thereto.

Which just goes to show – Indo-Europeanism For The Modern Age, the Return of Myth, is where it is to be found. Not only where we might perhaps somewhat pretetniously *presume* it to be.