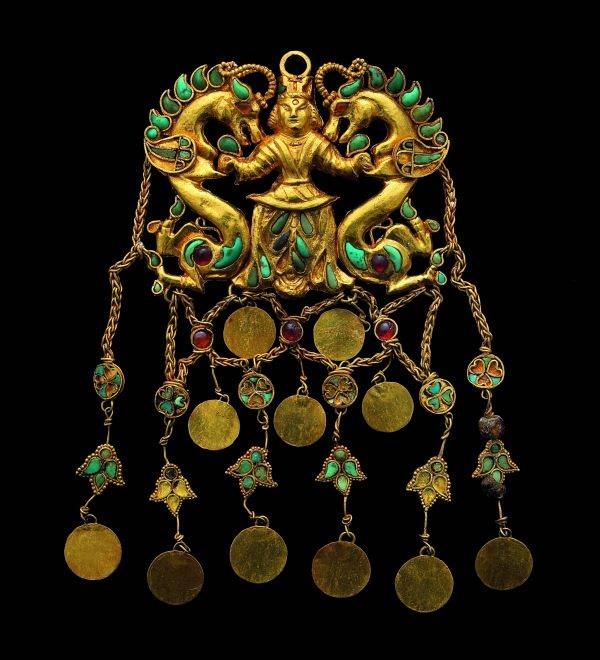 This Is #GangSteppe – one of a pair of pendants found in a female’s tomb in Northern Afghanistan. The treasure in question is part of what’s often called the “Bactrian Gold”, yet that is a bit of a misnomer. Dating from the 1st century A.D. [or possibly a century or so earlier], it actually appears that the seven grave-mounds in question were Central Asian Indo-European Steppe nomads – Scythians, according to most, but possibly Parthians, or even the last remnants of the Yuezhi in the opinions of others.

Depicted at the center, is a male figure grasping the forelegs of two horned, winged, serpentine-draconic creatures. As we have seen through various of our previous commentaries, the symbolism of such creatures is perhaps a bit different to what one might expect coming at it from a Judeo-Christian iconographic perspective.

In various Indo-European cultures, the serpent/dragon *can* symbolize an adversary, and thence the domination of such an adversary as a strong signifer of the power of a lord – Indra’s theonymic epithet of Vrtrahan, for instance. But they can *also*, themselves, be emblems of power, protectiveness, wealth, wisdom and knowledge, and nobility.

These last qualities are particularly communicated via the eyes – it’s what underpins the etymology of “Drakon”, the “flashing/flaring eyes” akin to those of a young wyrm amidst the Jarl descriptors in the Rigsthula, and in this particular case, the eye-catching deep-red garnet stones set into each draconic visage here.

[For more on Serpent/Dragon symbolism in these more positive and/or less adversarial senses within Indo-European mythologies, check my Naga Panchami article published a few weeks ago]

The Steppe Indo-European cultures appear to have been particularly enamoured with various forms of serpentine, draconic, and gryphonic visual motifs, and it is striking just how similar some of these finds from Afghanistan to the east are with materials unearthed considerably to the west,some thousands of kilometers away in the Black Sea region. While this is partially explicable due to the well-developed trade- and raid- routes which the Steppe tribes plied with great ease and high mobility, which partially serves to explain how and why material artefacts from various other non-Steppe cultures at opposite ends of the Indo-European-isphere found their way into these gravesites; the *other* explanation, and one that I think is often neglected in favour of simple focus upon the hard material culture remnants that we can *directly* perceive with our eyes, is that there has and always has been, a quite enduring connexion of culture and mytho-symbological lexicon amidst the core of the Steppe Peoples – and, to a lesser but no less significant extent, the Indo-Europeans all up.

This is partially why I felt I should start running these series of really cool artefacts and cultural kernels from the Steppe Folk, in order not only to help to illuminate and to elucidate what is an often-overlooked or unfamiliar area of the Indo-European span. But to begin to *show* some of the ‘bridging of gaps’ that never really went away in those areas implicitly in the “dash”, so to speak, within the veer-y term “Indo-European”.