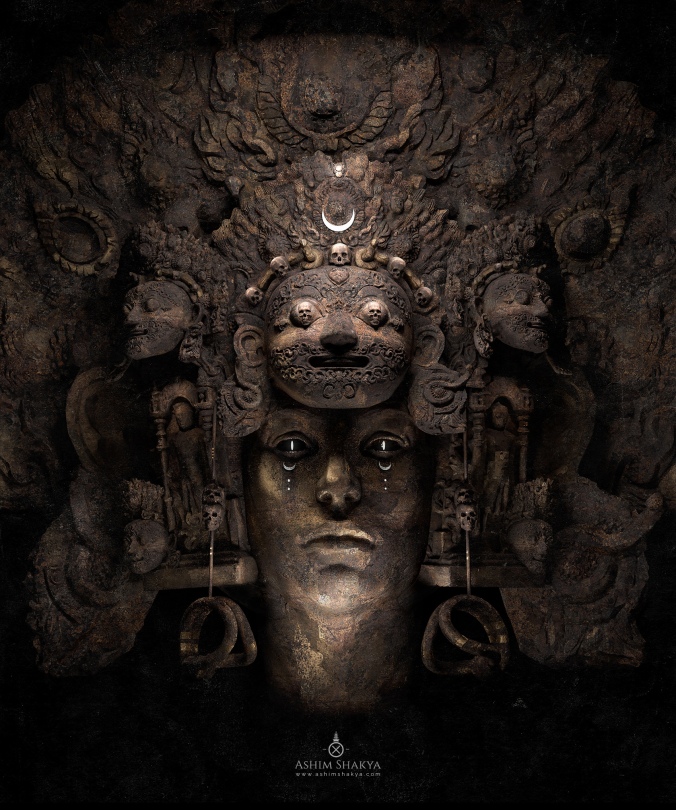 As a brief point of explication … Kaal (काल)is one of my favourite words in any language. For it simultaneously means BLACK, TIME, DEATH, DESTINY/FATE [and also Iron, and also the pupil of the eye – which, as you’ll note here, is beautifully illuminated]; deriving from Proto-Indo-European: “Kel”, which refers to a ‘covering’ – and therefore, has evidently taken on the sense of the Veil of Time, the Veil of Death, the Black Veil beyond which we cannot see, such is Night.

Other Indo-European linguistic derivatives of this “Kel” particle include the Skeleton, the Skull (something which *was* covered, yet which now is not – particularly post-mortem, and with the further-ravaging passages of Time); “Hall”, and “Hell” … which are, after all, covered places, the latter in particular, once again being a State Of Death [ongoing, continuous] experience; “Helmet”, “Cilium” [‘Eyelid’], “Koleos” [‘Sheath’] – all of which are *protective* coverings for something important; and, of course, “Color”. Small wonder that कला (“Kaalaa”), in Sanskrit, can mean “Art”.

In terms of the mythic saliency of this Greatest, Grandest of Fates, it is interesting to note that the ‘blackness’ of the Kaal deities [and here I am also very much thinking of KaalRatri], also refers to the blackness of the Night’s Sky. Hence why there are bright, shining objects, which are rendered all the more lustrous via the field of black within which they occur. This helps to portray the manner in which the Black, the Night, is full of wisdom that would be unrecognizeable, difficult to perceive during the day. This is also partially why the pupils of the main eyes of this image are lit up – are bright-light, rather than the more usual ‘black’. Because within *those* Kaals, Truth is perceived. Looking *in* (from our perspective) – as well as *out*, at us.

The Moon(s) in particular also recall the strong Lunar associations of Lord Shiva – Chandrasekhara, as a theonym, meaning One Whose Brow Is Crowned/Adorned With The (Crescent) Moon. And the Moon has also long formed a vitally important mechanism for measuring the passage of time – it is still the fundamental basis for our Hindu ritual calendars, for example, as well. [And, appropriately enough, it is the “Moon” which forms the core etymological particle of so many of our words for this particular day of the week – Moonday, Lundi, hemera Selenes, all of those Indic languages with “Somavara” derived terms, Induvasara, “Chandra”-stem etc.]

But to return to the Blackness point – it is interesting to reflect upon the fact that, in the context of the Bhagavad Gita, when Krishna [“Black”, as well – from PIE ‘Krsnos’] assumes the Vishvarupa [‘Omniform’], that this is *also* pointedly described as Kala [“श्रीभगवानुवाच | कालोऽस्मि लोकक्षयकृत्प्रवृद्धो लोकान्समाहर्तुमिह प्रवृत्त”]. For those of you playing at home, this is the part which Oppenheimer was quoting at Trinity Sands – “Now I am become Death, the Destroyer of Worlds” quip of Oppenheimer’s at Trinity Sands.

The broad fabric of the universe may plausibly be thought of as ‘space-time’, and the Blackness that is MahaKaal is therefore, both Space [and its Blackness], as well as Time [and its all-consuming, all-devouring eventuality – an emanation, after a sort, of an ultimate causality that lies within and behind and underpinning its Veil].

The Fiery motifs in the sculpture-work above and around the head, both represent the universe itself [this is a conventional iconographic purpose for ‘background’ flame in Hindu deific representations – it is why the NataRaja portrayals of Shiva as Lord of the Dance have a Ring (or, if you prefer, a ‘Wheel’] of Flame behind and around Him] … as well as the Flames of the End, the #EKPYROSISWHENN, that shall consume the World in the MahaPralaya – the Grand Dissolution/Unravelling at the End of Time.