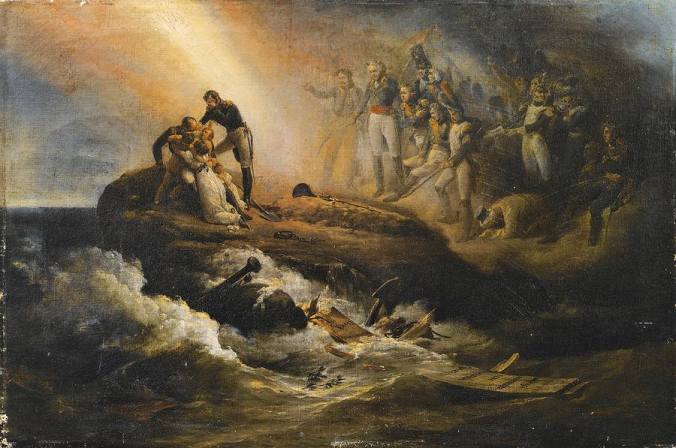 Three dear to me were born upon this day. In rough chronological order, Napoleon I Chakravartin, The Republic of India, and the Rev. Rolinson [the latter two are the same age].

The acknowledgement of one of these, is something of an ancestral cult – The Rev. Rolinson’s own (partially French) Father having maintained, if not the *direct* deification of The Emperor, at least its essential predicates.

Now, part of my reasoning for the “Chakravartin” epithet, is its rough equivalency to the use of “Weltseele” – World-Soul – in the writing of Hegel, in direct application to Napoleon Himself:

“I saw the Emperor – this world-soul – riding out of the city on reconnaissance. It is indeed a wonderful sensation to see such an individual, who, concentrated here at a single point, astride a horse, reaches out over the world and masters it.”

And in terms of His sheer, continent-reshaping if not outright epoch-making significance, I can see no serious reason to disagree with Hegel’s intended significancy to the term.

I have considered in some detail elsewhere the various shades of meaning to the Sanskrit theo-political title of “Chakravartin”, but to briefly reprise – it refers to “One Whose Wheels [Chakra] Are In Motion”; both in terms of a world-sovereign who can ride in his chariot where he likes due to the unparalleled and paramount nature of his mighty suzerainty; but also, in a more figurative sense, to the concept of the ruler that is functionally equivalent to the chariot-axle that is the Axis Mundi of the world, about whom all else seems to turn, and at a tempo and at a pace, in a degree and by decree [whether explicit or ‘merely’ sublime], almost all his own.

Now, clearly Napoleon eventually met his mortal limits. He may have been a ‘wave’ coursing through our history – but not once, but twice, three times even, found himself at places where the Wave finally broke and began to roll back.

And that is part of the sheer amazingness of the man. Not least due to the phenomenal competencies as both Leader and Bearer of Luck.

We should say Kingly, indeed *Imperial* Hamingja, to utilize Nordic metaphysics upon the subject – “Charisma”, the Greek term which previously meant “Gift from/Favour of the Gods”, doesn’t *quite* seem to cut it : although any man able to escape from incarceration, make his way across the ocean, and then proceed to convince through force of rhetoric alone the entire regiment sent to arrest him (including its commander, who had declared he would bring Napoleon back to Paris to face further sanction in an Iron Cage) , to join his cause… and who then swelled his army by the further thousands simply by walking across the countryside, downright daring those ordered to shoot him down to do so … well, this is quite clearly more than a man; more even than an *idea*, whatever his eventual, ultimate shortcomings of literal and direct immortality or military-politico potency par excellence.

Speaking of the Nordic elements of such things, there is also a tempting etymological derivation for his name – tying it ultimately to the Nibelung, the Niflung – an ancient set of much-storied kingly lineages of old, amidst other occurrences of the title; and which would be linguistically derived from the Sky, the Clouds – consider/compare the “Neptune” of Classical mythology, Apam Napat from the Indo-Iranian religion or on a figurative basis, Ouranos; other descendants of this Proto-Indo-European “Neb” particle including “Nebula”, “Naptha”, and “नभस्” [which also, interestingly enough, in addition to its ‘conventional’ aetheric associations, ties as well to the emanation of the Lordly, the Imperial Soma].

A Lord of the Sky, a Lord of the Mists [and perhaps, figuratively, thence of the ‘Fog of War’], a Bringer of Supernal Fire, and One Who Has Most Assuredly Taken HIS Place Amidst the Akasha – The Heavens.

He was the Vajra, the Thunderbolt, In Person and Incarnate; the Spear-Shaft, the Arrow; the Storm which Swept across Europe leaving both Devastation and Enlightenment in Its Maha-Wake.

A Bolt from the Blue Whose very existence seemed to belong more to the Mythic Ages of Humanity’s distant past, than the increasing bureaucratic mire of the mass-man early-mid-Modern then-Present.

It was said of Metternich, the man who set himself the herculean if not downright sisyphean task of re-organizing Europe in Napoleon’s massive wake, that when he died, the intricacies and layers of his machinations that shrouded his ultimate purpose were such as to cause Talleyrand to ask “I wonder what he meant by [doing] that?”

As applies Napoleon I Chakravartin Himself, I rather suspect that the answer is, in point of fact, abundantly clear.

His time amidst us ‘mere’ [in both PIE senses of the term] mortals done and through, and having found His then-people to be unable, unwilling, and unworthy of Him, he once again transcended back up into the Heavens – the Meteor, the Shooting Star which *rises* *into* rather than falls from the Night’s Sky.

He was, in short, Going Home.

We shall quote, in closing, a translation of the poem of Heinrich Heine:

“TO France there wandered two grenadiers,
In Russia once captives made.
To German quarters they came after years,
And bowed their heads, dismayed.

And there they were sorrowful tidings told
That France was lost—and repelled,
Destroyed and defeated the army bold—
And the emperor captive held.

The grenadiers wept grievously
When told this mournful lore.
Then said the one: “Ah, woe is me,
How my old wound is sore!”

“The song is sung” the other said,
“I too would die with thee;
But wife and child, if I were dead,
Would perish utterly.”

“For wife and child what do I care!
Far better longings I know:
As hungry beggars let them fare—
My emperor, emperor—woe!

“But grant me, brother, one only prayer:
Now when I here shall die,
My body take to France and there
In French earth let me lie!

“My cross of honour with scarlet band
Upon my heart be placed;
And put my gun into my hand,
My sword gird round my waist!

“Then quietly I’ll lie and hark,
A sentry in my tomb,
Till I the horses’ prancing mark,
And hear the cannon’s boom.

“Then my emperor rides across my grave,
And swords will be clashing hard:
And armed I’ll rise up from my grave,
My emperor to guard!”
”

Indeed, one could almost suspect that the official portraiture of Emperor Napoleon I Chakravartin, was somewhat in error – and that, instead of being portrayed with but a single hand, it should perhaps have been with *one Eye*, instead!