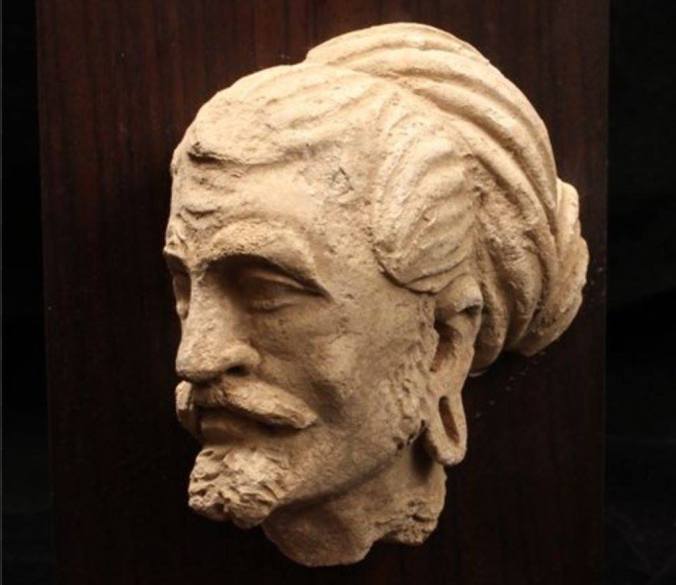 I have been told I bear a certain resemblance to this chap.

Sculpted head of a Brahmin of the area now known as Afghanistan, dating from the 3rd-4th century A.D.

It may seem somewhat curious to us now – when Afghanistan is mostly known to us as the area upon this Earth where “empires go to die”; chiefly (although not exclusively) inhabited by various groups of Islamic folk of often Central Asian or Persian heritage … but once upon a time, the lands of Afghanistan were very different, indeed.

As far back as the archaic mists which shroud the origins of the RigVeda, we have scriptural attestations for these areas being inhabited by Indo-Aryan peoples [the Gandharas, in particular, who may have leant their name to modern Khandahar], practicing a religion and speaking a language broadly interoperable with the Vedic and Sanskrit traditions that would provide the foundations for modern Hinduism.

But the past is always in motion – and in stark contrast to Afghanistan’s reputation today as the sort of place one goes and then … doesn’t come back out of; in ancient times, the place was something of a cross-roads for various routes of trade, pilgrimage, and imperialistic expansion. The area thus wound up under the dominion of several successive empires – some foreign in origin, such as Persia or that of Alexander the Great; and some rather more ‘home-grown’ … or at least ‘hybridistic’ like the Greco-Bactrians or the Kushan.

This did not simply lead to an array of interesting genetic ‘inputs’ into the area, but also quite a significant scope for artistic, other cultural, and even religious influence turning up from those who found themselves there.

The history of Afghanistan, then, prior to Islam turning up a little more than a thousand years ago, is one of the complex interleavings of peoples, customs, and faiths from across the spectrum of the more eastern Indo-European Peoples – everyone from Greeks and even Romans to the west out to the mysterious Yuezhi and Tocharians in the north, as well as the Iranians and more closely aligned Vedic peoples who were their immediate neighbours to either side.

It should thus come as no surprise to find adherents of the Vedic religion so prominently represented in the extant remnants of culture left behind by these peoples; although it must also be said that other religions, too, were also similarly prominent – with Afghanistan having a notable period as a center of Buddhist learning and culture (hence the existence of the ‘Bamiyan Buddhas’ and the like); but also providing a most intriguing still-living relic in the form of the most ancient religion of the Kalash People [an Indo-European folk who speak a *third* and arguably *more archaic* form of Indo-Iranian than that which provides the basis for Sanskrit and Avestan] [one of the areas these folk and their cousins inhabit being known as ‘Kafiristan’, or ‘Land of the Infidels’ due to their stubborn hold-out against conversion to Islam for almost a millennium – an ongoing struggle for many Kalash that has understandably only intensified thanks to the ongoing deterioration of stability in the area subsequent to ‘various forces’ pushing the Soviets out in the late 1980s] .

At some point, I may write up a more detailed history of both religious and material/human culture change in these places over the millennia – but suffice to say, that at the time this fine work of sculpture was likely produced, Buddhism and various Iranian heresies were on the relative wane, and Hinduism – the faith closest to what had once been near-universal in these lands, albeit subject to many centuries of ‘development’ – had once again started to move back in in triumph; as we can tell from an array of indicators ranging from coinage featuring Deities that are most readily familiar to us, through to the ruling names of kings, the records of both these states and their surrounding neighbours, and of course the sculptuary and other artefacts which have been unearthed to attest to their passing.

It is a sad thing that some more recent folk of Afghanistan have seen fit to attempt to ransack, despoil, and outright destroy the yet-remaining evidence as to their heritage. I understand the obvious appeal of obviation of that which challenges the universalism and suzerainty of one’s own preferred beliefs, on grounds that the past is apparently to be considered both ‘still living’ and an ‘active threat’. But it seems curious indeed to me that anybody truly assured of their own values and righteousness would find themselves feeling so ‘actively imperiled’ by a bit of statuary. Unless, of course, the creeds in question are weak enough that the merest gaze upon a past perhaps different to the narratives which these iconoclasts have sought to deploy is enough to render them flimsy enough to blow away in the Kandharian wind.

In any case, I know I am not the only one to look upon faces such as these, ,and read of the languages, culture, and customary faith of the people who bore them and carved them, and see something that pulls at the heart with the warming familiarity that one accords to cousins or even closer kin.

One day, perhaps, we may indeed #MakeAfghanistanGandharaAgain