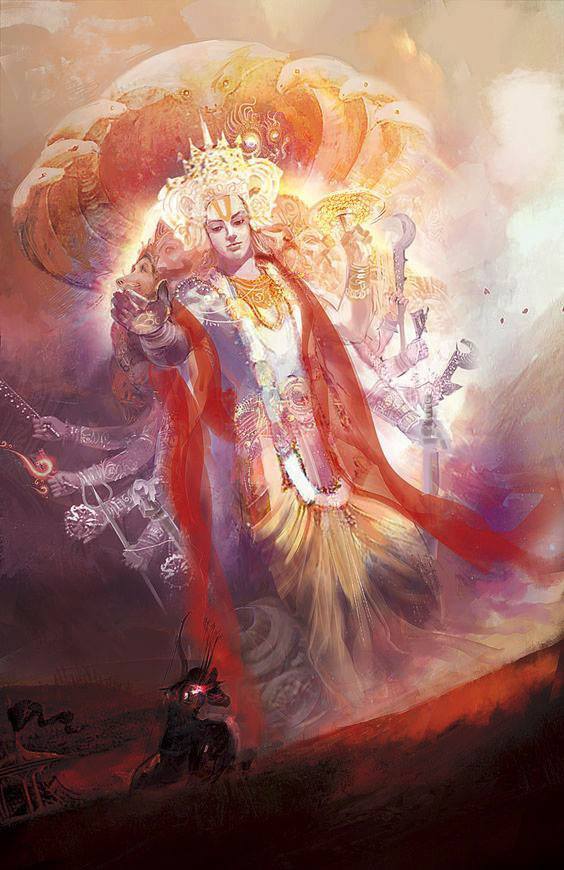 As is well known, I am not a Vaishnavite, nor a Krishna-bhakt. And, in point of fact, the traditional rivalry of Shaivites with these is common knowledge.

But it is difficult to look upon this image – for me, anyway – and not feel something.

It depicts the portion from Bhagavad Gita wherein Arjuna asks to look upon Lord Krishna as He actually is – this is also called the Vishvarupa form in reference to the way that all is seen to be contained within it. A sort of infinite/universal form.

In terms of the surrounding narrative context for this incidence: Arjuna had sought guidance as to what to do in the situation of war which existed between his immediate family and allies – The Pandavas – and the Kauravas who arrayed themselves against him [who were *also* his kin].

The ethical discord Arjuna felt was, in this instance, the result of being compelled by moral duty [and, in this particular case, the fairly direct instruction of a God] to slay his own relatives. An understandable compunction.

And whilst Lord Krishna’s moral teaching whilst still in a more ‘mortal-seeming’ form had indeed been compelling, Arjuna’s heart still had doubts. That is … until he saw what happened next …

This part of the Bhagavad Gita is the source for two of the quotations or formulations that many Western folk know – even if they don’t necessarily know the source from whence they derive.

The phrase “brighter than a thousand suns” which is often applied to nuclear weapons derives from the eleventh line of this chapter, as a way of attempting to describe the indescribable sight of the radiance and magnificence of the Vishvarupa form.

The other, by contrast, takes on a more overtly darker shade of interpretation: “Now I am become Death – the Destroyer of Worlds”. This is, of course, the English-language rendition recited by Robert Oppenheimer at the Trinity test which ushered in the Atomic Age of nuclear weapons. A justifiably famous quote, and a uniquely beautiful epitaph for the situation. But also one that has been frequently misunderstood in its impetus [in part due to the difficulty of rendering in simple and elegant form the Sanskrit word Kaala – which has a meaning-field extending from Death [particularly in the form of old age] through to Time, and also blackness and iron].

You see, what prompts the quote from Lord Krishna in the original text is Arjuna’s bewildered statement that amongst the many glories he sees in the Vishvarupa form, is the procession of the warriors of the battlefield of the Kurukshetra War flowing like rivers into the many and manifold mouths of the universal form of Krishna. There, the teeth of the Deity are crushing and devouring these forms and folk. And Arjuna wants to know what on earth is going on and why.

Lord Krishna allays the confusion, noting that as the Divine, He is also master of fate – the ongoing (and long-running) causation of everything that has happened, and will happen. The death of Arjuna’s kinfolk is thus, as it were, inevitable – for Lord Krishna has willed it.

Although there is another [not contradictory] interpretation which notes that as ‘Time’ is, indeed, what kills all of us in the end [even The Gods], then truly ‘Time’ is the ‘Destroyer of Worlds’ and the inevitability of the end of any given individual.

In either case, the next line brings things back to the battlefield:

“Therefore, Get Up And Attain Glory. Conquer Your Enemies And Enjoy A Prosperous Kingdom. All These Warriors Have Already Been Destroyed By ME. You Are Only An Instrument.”

Or, in other words, it is an instruction to put aside doubts, and act as must needs be done. To play one’s essential role as an Implement of Divine Will. And trust that to do so, to carry out acts which cause one conscience-consternation, is still, nevertheless, the right – the righteous – thing to do.

A fitting sentiment for a man who has just helped to deliver the most powerful and destructive weapon then available on Earth, and who keenly felt the ethical implications of it being able to vapourize in a second, tens of thousands of people, no?