I’ve previously written a bit about the occasional bouts of revanchist and irridentist tendencies which can accompany political Hinduism – the most common of which are rather justified claims that India ought to maintain or extend territorial possession to include areas such as the full extent of Jammu & Kashmir, and areas of China (or, more specifically, TIbet) on both India’s northwestern and northeastern flanks. These imperatives are often made on the basis of ‘temporal’ authority, and not infrequently hinge upon differing interpretations of agreements drawn up by the withdrawing British.

To these, we can often add declarations that Mother India ought control other areas slightly further afield and adjoining the above – extending sovereignty to encompass Mt. Kailash (the Residence of Lord Shiva, and thus a prominent holy site), for instance, and other areas of spiritual importance – whether in the Himalayas or elsewhere.

And, on top of this, the various demands for the formation of “Akhanda Bharata” [‘Undivided India’] via the addition of the whole of Bangladesh and Pakistan to the pre-existing Indian state (which is, if you remember, how a fairly substantial swathe of the original Indian Freedom Fighters wished for things to proceed in the early 20th century, anyway. Occasionally, there are also demands for Afghanistan to additionally be included in the above due to its historical incorporation in some of the previous great Indian Empires [indeed, up until 1895, the folk of ‘Kafirstan’ – an Afghan province – were so known because they still practiced a version of the ancient Aryan religion (thus rendering it a rather appropriate toponym) … while their neighbours, the Kalash, still worship Gods of the Aryan Pantheon who are broadly recognizable to us Vedic-inclined Hindus today]. There is also often mention made of the idea of bringing in the modern state of Myanmar to this region as well, due to its supposed previous settlement by Indo-Aryan peoples. 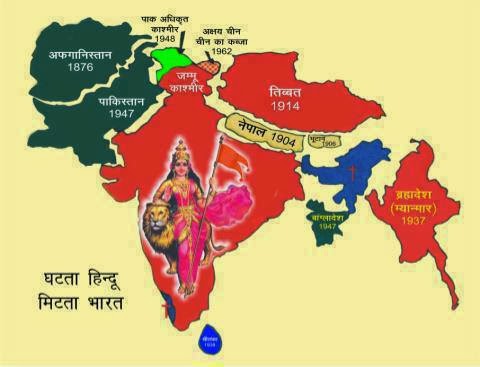 To these, we can also add the notion that areas further afield to the East of India ought also be incorporated – due mainly to their historical participation in the impressively broad pre-Islamization Indian/Hindu cultural sphere.

This is why you will often see maps (usually a little more restrained than the one below) which extend at least all the way out to Bali in Indonesia (which is still Hindu today), covering Thailand, Malaya, Cambodia (where Angkhor Wat, let’s remember, was originally built as a Hindu temple complex), Singapore (whose very name derives from an ancient Sanskrit epithet – “City of the Lion”) and other such modern South East Asian polities.

And then, as a final category, we have trends like the one below … which we might perhaps fairly describe as “Dravidian Kitchen Sink-Ism”, wherein the demarcation of what might constitute “Akhanda Bharata” is taken to pretty much its furthest possible extreme.

Here, as you can see, some enterprising soul has decided that everything from the western coast of Australia through to Madagascar ought to be claimed within it – presumably on the strength of i) recent hypotheses that some northern Aboriginal folk bear genetic evidence of previous contact with Dravidian traders; or ii) the rather less overtly scientifically backed ancient Dravidian folk-myths that they are the last of the ancient scions of a supposed sunken continent known as “Kumari Kandam” – which, before it sank beneath the waves, supposedly occupied a geographic position between and linking India, Australia, and Madagascar. (It’s probably important to note that Tamil nationalists are not the only people who’ve ever thought this – prior to the understanding of plate tectonics, Western academics also proposed a similar theory as an explanation for why Lemur fossils are found in both India and Madagascar, but not on the present-day lands in between).

Now, while there ARE historic settlements (and perhaps even kingdoms) which now lie beneath the sea thanks to prehistoric variations in climate and water-levels (particularly in the Gulf of Khambat and Bay of Bengal), an entire undiscovered continent down there stretching across most of the Southern & Indian Oceans is probably stretching the bounds of plausibility a little bit. Anyway, I digress.

The reason why there are so many – and such shifting – conceptions of what is meant by “Akhanda Bharata” is not simply due to the demands of expediency, or even the mere factual tenability of various territorial claims.

Instead, it’s the result of the several competing conceptual fields which have gone into producing both the notion and the groups of people for which the concept stands.

“Greater India” (as it is also known), is not simply a political unit. Nor does it only encompass a “Holy Land”, or an Ethnic Homeland (in the same way as, say, “Aryavarta”). Instead, it represents something of a confluence of Sacred Geography with Mundane Geopolitics; and with additional complications and complexities introduced by the fact that there are often mutually competing agendas and metanarratives which have gone into the unfurling of its prospective boundaries for each individual commentator (for example, the map below apparenly including parts of Afghanistan on grounds of their still-extant Aryan and Aryan-Religion populations … but also the Philippines due to historic contact with the Indian cultural sphere, parts of Australia due to alleged Dravidian genetic or geographic connection, and Madagascar despite this last one not being inhabited by Dravidian peoples nor speaking a Dravidian language)

Phrased bluntly, the term “Akhanda Bharata” appears to be just as contested – and potentially far more open to interpretation – than even the pretty big notion of “Indianness”. Certainly, it’s much more open to use and co-option than a comparatively narrow (and decidedly ethnically/geographically linked) term like “Aryavarta”, particularly for those non-Aryans who wish to make use of the idea of ‘Greater Indian Civilization’ – or those who wish to incorporate decidedly non-Aryan and/or non-Indian peoples and lands into their revanchist imagi-nation-ings.

Still, if there’s one thing which seems rather strange to me – it’s that many of the multiplicity of Indian meta-national extensions only seem to go south and east – and maybe a bit west and north. We know from quite an array of evidence – whether genetic, linguistic, archaeological, or historical (and perhaps even scriptural), that the Aryan peoples also live (and lived) on quite a bewildering array of terrain in the opposite directions to those which the orange on this map extends. Whether we are talking about present-day Iran (whose ancient Haoma-rituals and ecclesiastical language bear such a remarkable resemblance to our own), or further West and North into the Caucasus (where some of the surviving pre-Islamic faiths can often shelter curious echoes of the older Aryan myths), and on into the steady range of locations proposed by (predominantly European) thinkers for the Aryan Urheimat – the Pontic Steppe, lands not too far from the Balkans and south-eastern Europe … or even the northern lands of proxima Scandinavia (whose myths and pre-Christian religion are such close brethren of those of the ancient Vedic/Hindu faith).

I get that the populations of the latter lands are everything ranging from literal Mlecchas to Goras, and Barbaras folk all the way up – and, perhaps more importantly, that the *last* time India was in union with some of the lands and peoples to the west, it was in the form of colonization … but it still remains interesting that some would reject any form of ancestrally based solidarity with these places in favour of extending a decidedly hypothetical suzerainty east and south, instead.

Still, as we enter into an age where Mother India might once again be astride Her corner of the globe like a colossus … it may soon come to pass that the notion of a “Greater India” – or the importance of an “Indian Cultural Sphere” – will be concepts of decidedly far more than ‘mere’ academic application & interpolation.

One thought on “Akhanda Bharata – A Concept In Flux”